Over the past 5 years we have been slowly fencing in pastures to keep our livestock safe and secure and to help protect our erosion prone areas like steep hillsides, ponds, and streambanks.  We started off with nothing fenced in, just a half mile of decorative white vinyl fencing that the previous owners installed.  The livestock laugh at that fence as a barrier.  They go right through it.

Our first grazing animals were the goats, and we made do with electric netting with them for a year while we fenced in our first pasture that fronts the road.  The electric netting works really well for rotational grazing, but it’s not good for the sole barrier between the animals and danger.  Sometimes it shorts out and it’s no barrier at all when it’s not electrified.  Sometimes it blows down in heavy winds.  It’s just not good to have only electric fence.

We finished that first pasture in mid-2011 before we got our first few cattle, and then we fenced in another smaller pasture the next year.

Those were the easy ones.  The final 2 pastures were much more difficult to complete because we had to go over the ridge, through the woods, to grandma’s house we go.  Those 2 pastures were finally finished in very late 2014, so this has been our first full year with 4 pastures that we can rotate our animals around on.  It’s still less than 40 acres, but it’s the only grazeable land we have right now.

The final pasture, all the way on the north side of the property, was utilized by our Amish neighbor for the last few years as cropland so there was no pasture there.  This spring I seeded it with a mixture of grass and clover.  Those are the only  seeds we’ve put in any pasture.  The other pastures have been rejuvenated through grazing alone.

But seeding that pasture was definitely worth it.  All year it has been lush and green and growing faster than any other pasture we’ve got.  The cattle and sheep race me to get into that field every time we rotate them back to it.  It makes me think about drilling some seeds through the sod in our other pastures next year. 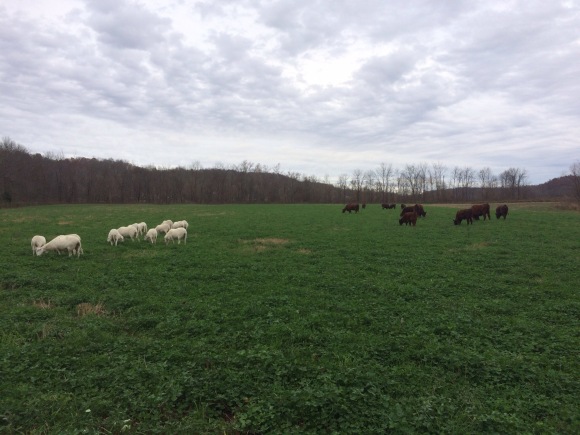